Today was my last session with Tony since I'll be at my aunt's funeral next week and will miss the end of Drawing and the beginning of Painting with Chris Hough. Bummer. I shall miss Tony's little "tic" of "Let the words out Tony" but look forward to Chris's, which is a funny nervous cough half way through sentences...

Today everyone had to bring an object in - I didn't because I didn't know so I plonked my sunglasses down on the white paper.

The difference today turned out to be that we could choose our objects and put them where we want on our paper. I was attracted to these:

We started to draw and Tony emphasised how you draw in the beginning to extract the data of the object you're interested in, you draw to work out what you're going to draw, you make loose rapid sketches, you might choose to work blind (not looking at your paper) or do a continuous line drawing. That's all great fun, I thought, but if you go in that direction how do you reconcile it with a vaguely realistic looking object towards the end? I didn't fully understand, unless it was to create some interesting ghosting.

Once you've practiced each object you're interested in, you'll maybe keep some or cull some or start again. Scale is your choice.

It's a good point to emphasis that what you think you are interested in at the beginning, and what the work might end up resonating, might be very likely to be two completely different things. Often meaning and significance arrive AFTER the making . This can be troubling, uncomfortable. A narrative you aren't intending might arise. The narrative you thought you were attached to might not. You have to suspend your suspicion while you're in the process of making. You go gradually from a state of not knowing to a state of being aware of suggested narratives you put the cart before the horse. You involve others because they can bring other meanings you hadn't thought of, which you can decide to enhance if you like, as you progress.

We were instructed to draw in pencil, 2B. I am still pressing too heavily in the early stages so my ghosting is pretty strong, I need to use the side of the pencil more and scribble lightly over it then rub, when I want to get rid of objects..

We had various small group and whole group discussions and advice, Sarah was usually pretty spot-on in her thoughts - shifting the lying-down lamp over to the left for example and making it larger. I was attached to the boat's lamp but didn't want it floating nor did I want it in the middle, so I hid it partially behind the sculpture and the other lamp. I learned my lesson weeks ago about how Tony loves things on the edge, so I drew the weird rabbit-holding-candle-holder to the right, just a sketch but later Tony said I wasn't allowed to touch that bit. He emphasised again not to take all parts of the picture to the same level of conclusion and finish, so this rabbit was the bit I was to leave.

In terms of meaning, I was already feeling it was a landscape with the rabbit sort of looking "in charge", carrying things off, and the contribution of my colleagues was to confirm the architectural / geometrical/ industrial nature of the shapes, leading me to think about a ruined city ( Ancient Rome ??) being "dealt" with by the rabbit! And Sarah said it was like the rabbit was carting things off a building site! Tony talked about the more translucent nature of the mark-making saying I should look into refraction and reflection in art. Both are interesting ways forward, though I am thinking of them as diametrically opposed - solid & architectural Vs ethereal & not-quite-there, confusing.

After a puzzling conversation with Tony in which I couldn't work out what he thought I should do next because he seemed to think I shouldn't do anything, I speeded up to do some inking - I need practice with that - knowing I wouldn't be here next week.

Tried not to go mad with the inking, wanted to take the dark bits darker but wasn't confident enough since Tony always says do it lightly...

Technically, I am pleased with the sculptural thingie - but the inaccurate elipses on my lying-down lamp are annoying me. Glad Sarah told me to put something down the bottom left - I added the shadow which anchors it a bit more. 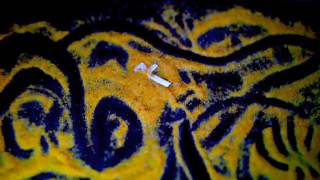 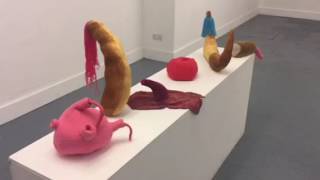